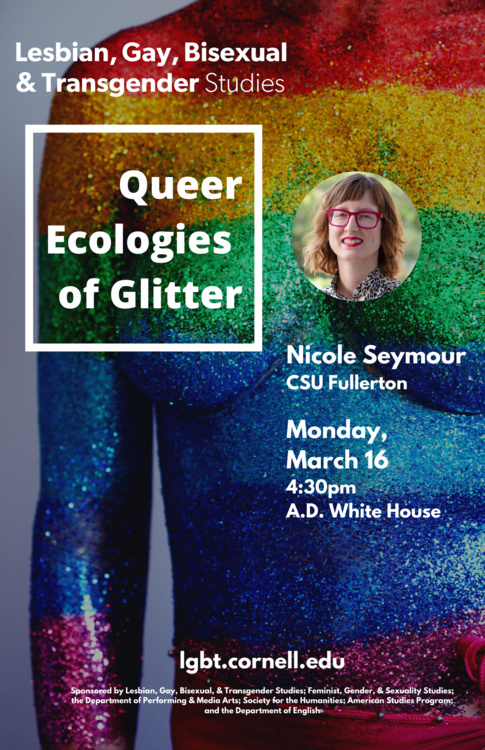 In this talk, Seymour will present work from her new book project: a cultural history of glitter. She will focus on how this seemingly-trivial substance has surprisingly found its way to the center of political controversies. For example, the “glitter bombings” of homophobic and misogynist politicians in Mexico and the U.S. over the last decade exploit the unique qualities of this substance—dispersibility, stickiness, irritation—while participating in a longer history of “tactical frivolity” (Amory Starr) in activism. Meanwhile, the recent environmentalist backlash against glitter due to its microplastic constitution has overlapped with the development of biodegradable glitter products such as “glitter beer”—often marked to LGBTQ+ communities. Seymour thus proposes glitter as a unique material site at which to consider the shifting intersections of environmental and queer politics, and to confront the impending future that scholars such as Heather Davis have dubbed the “Plastisphere.”

Nicole Seymour is Associate Professor of English and Affiliated Faculty in Environmental Studies and Queer Studies at California State University, Fullerton. She is the author of three books, including the award-winning Strange Natures: Futurity, Empathy, and the Queer Ecological Imagination (University of Illinois Press, 2013), which helped inaugurate the environmental humanities subfield of queer ecologies. She has published numerous essays in venues including Cinema Journal (now the Journal of Cinema and Media Studies), the Routledge Companion to Environmental Studies, and TSQ: Transgender Studies Quarterly. Since 2017, she has served as a coordinator for the Knowledge Action Network for Transformative Climate and Sustainability Education and Action (“KAN” for short), a joint project of the University of California and California State University systems. Her climate pedagogy work with the KAN was recently showcased at COP25, the UN Climate Summits in Madrid, Spain.

Free and open to the public