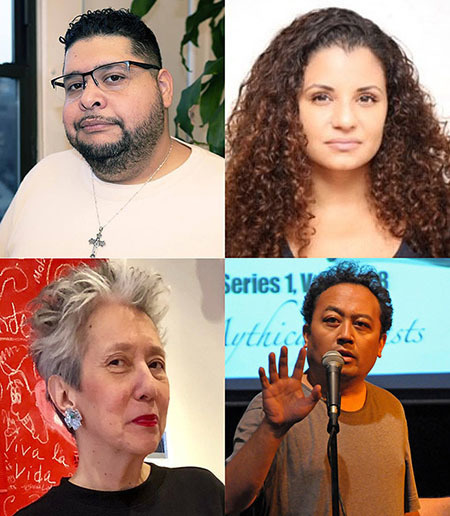 A new initiative from the Cornell University Department of Performing and Media Arts, the Asian American Studies Program, and the Latina/o Studies Program is enabling students to put into practice what they are reading, discussing, and learning in their classes. The series, “Critical Moves: Performance in Theory & Movement,” provides students and community members the opportunity to engage and participate in hands-on workshops with scholars and practitioners.

An ongoing conversation between performance theory and practice, the series models Cornell’s active engagement with the Ithaca community at large and is open and free to all who wish to participate and attend. All events will be held online.

Anacaona Rocio Milagro is a poet born, raised, and still living in New York City, Washington Heights. She earned an MFA in Poetry at NYU’s Low Residency program in Paris and an MPH at Columbia University. Her work has been published in Narrative Magazine, LittHub, and the anthology The Breakbeat Poets, Vol. 4: LatiNEXT (Haymarket Books, 2020).

Rich Villar is a poet, educator, curator, and author of Comprehending Forever (Willow Books, 2014). His poems are anthologized most recently in What Saves Us: Poems of Empathy and Outrage in the Age of Trump (Curbstone/Northwestern University Press, 2019), and The BreakBeat Poets, Volume 4: LatiNEXT (Haymarket Books, 2020). He is a 2020 New Jersey State Arts Council Fellow and the founder of La Cocina, an interactive event series and grassroots initiative fostering Latinx art, culture, and community.

Jessica Hagedorn is the author of Toxicology, Dream Jungle, The Gangster of Love, Danger and Beauty, and Dogeaters, which won the American Book Award and was a fiction finalist for the National Book Award. Her work as a playwright includes the musicals Felix Starro and Most Wanted, and the stage adaptations of Dogeaters and The Gangster of Love. Work in film includes the script for Fresh Kill (dir. Shu Lea Cheang). She is the editor of Manila Noir and Charlie Chan Is Dead: An Anthology of Contemporary Asian American Fiction. Hagedorn is presently working on a musical play about the pioneering all-female rock band Fanny.

Regie Cabico is a spoken-word pioneer who won The Nuyorican Poets Cafe Grand Slam Championship (1993) alongside earning top prizes in three National Poetry Slam competitions. His work appears in over 30 anthologies and his television credits include two seasons of HBO's Def Poetry Jam, TedX Talks, NPR's Snap Judgement, and MTV's Free Your Mind. He is publisher of Capturing Fire Press and producer of Capturing Fire Slam in Washington, DC.